The co-host of the 2020 CMA Awards, Darius Rucker took the stage tonight to perform his newest single “Beers and Sunshine.”

This song always makes me smile! Summertime anthem from @dariusrucker with “Beers And Sunshine!” 🍻☀️ pic.twitter.com/pN73Qwqw1M

He was originally scheduled to perform the song with Lady A, however; they had to cancel at the last minute out of precaution once an immediate family member of theirs tested positive for the coronavirus. 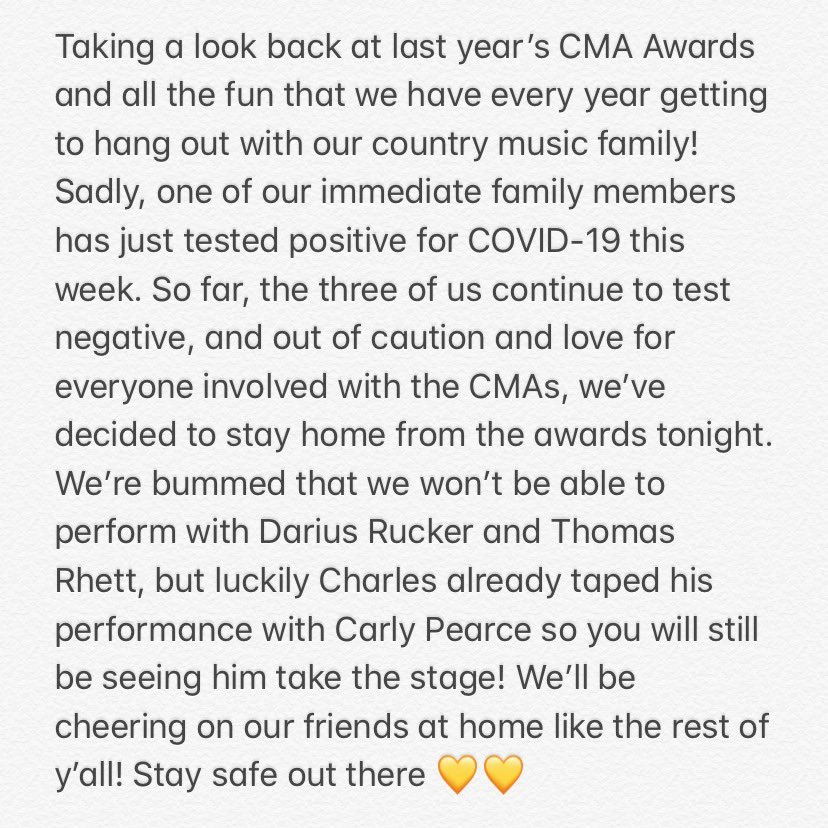 Can’t wait to be back on stage with some of our best friends! #CMAawards Nov 11 at 8/7c on ABC.

The CMA’s marks the first time Darius performed his song, “Beers and Sunshine” live. The song was released on August 6, 2020, and debuted at #24 on Billboard Country Airplay chart, which is his highest debut song to date. Beating his song in 2012, “True Believers” that debuted at #26.

You know what we all could use right now? #BeersandSunshine. Check out the new music video at the link in bio! 🍺☀️

The 54th Annual CMA Awards aired live Wednesday, November 11, 2020. Like other award shows, the CMAs had to adjust how they did things this year to adhere to COVID-19 safety guidelines. There was no live audience, but country artists were able to attend the awards show in person, all distanced from each other.

#2 REASON TO WATCH THE #CMAawards IN 2 DAYS

The CMA Awards were established in 1958 and was the very first trade organization formed to promote an individual genre of music. In 1967, the first CMA Awards Banquet and Show was held, and the following year it was broadcasted for the first time on television. It is the longest-running, annual music awards program on network television.

Watch Darius Rucker perform “Beers and Sunshine” at the 2020 CMA Awards below.

Shania Twain is back with her first single release in five years, and the singer pulled out all the stops to make the comeback memorable. While the world was locked down during the pandemic, Shania Twain was writing songs and preparing for what would become her sixth studio album. While the album is yet-to-be named […] More

Another familiar face to Allen – but a new one to us – is the actress who plays his 13-year-old daughter in The Santa Clauses.

The new season starts on November 13…

On September 21, 2022, Florida Highway Patrol in Tampa released a public statement, along with photos and a video, of a multi-semi-truck crash that left Coors Light all over the I-75.

When it comes to Southern wedding traditions, one of the most popular traditions still observed by many brides and grooms is one called burying the bourbon.

Professional bear hunter Jaime Lambert and his friend Mike Clough from Ellsworth, Maine have been hunting a massive black bear known as Zodiac, which has gained popularity in the region for terrorizing the neighborhood.

We love these nicknames they have for each other, but we’ve always wondered how they got them! Well, during her recent appearance on Live with Kelly and Ryan, she finally told the story.